You thought the 2007 federal budget deficit was only $163 billion? How about $2.4 trillion by the accounting rules the private sector uses!

The US government's budget deficit for 2007 was $163 billion as officially reported by the Treasury -- the number given in the news that everyone writes editorials and op-eds about. And most observers have described it as good news, since as a percentage of GDP it is the smallest in six years and well below the average for the last 35 years. The White House and Congress take credit!

But wait ... the Treasury has also published another set of numbers on its web site, in its 2007 Financial Report of the United States Government, that give a very different figure for the increase in its net liabilities for 2007, albeit one that receives very little publicity: More than $2.4 trillion. Yes, with a "t".

For starters, the one-year increased liability for Medicare and Social Security alone is more than $2 trillion: 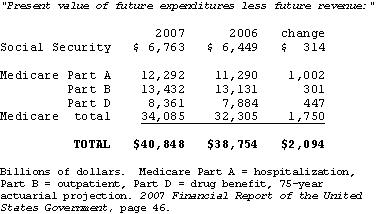 How can two such hugely different numbers -- one almost 15 times larger than the other -- be provided by the US Treasury for the same thing? The answer lies in accounting methods: the difference between cash and accrual accounting.

Cash accounting is what the government uses for its books. This computes net income or deficit by counting only cash income "in" and cash expenditures "out" during the year.

Accrual accounting is used in the private sector -- in fact, cash accounting is illegal for most businesses much larger than a newsstand. The reasons should be obvious, but a simple example can make them clear.

Say you are a business manager and make a deal for the business under which it receives a net $1 million cash payment this year. That looks good! But wait ... suppose that to get this payment up front you commit the business to make a $10 million payment to the other party ten years from now.

So when using accrual accounting -- as required by law and your accounting firm -- you are seen accurately to have created a $5 million loss for the business. You have some explaining to do to your boss.

But imagine that instead you use cash accounting. Then the $1 million that comes in today boosts the business's income and profits by fully that much while the attached $10 million liability is ignored. The business's owners don't know about the liability because it's not reported on the books. They give you a fat profit-sharing bonus, you take it, retire, and are long gone when the $10 million bill lands on them and everyone else in the business as a surprise -- bam! -- in the future. (Say: "Enron", which used sophisticated illegal techniques to do just this, report income on the books while keeping attached future liabilities off them.)

Yes, many people will then become very upset -- but you'll have gotten yours and be gone. All those angry people will be somebody else's problem.

Now imagine that instead you are the U.S. Congress. You exempt the federal government -- that is, yourself -- from using the accrual accounting methods that you impose by law on everybody else, and have it simply use cash accounting for programs such as Social Security, Medicare, Medicaid, federal and military pensions, and so forth.

Thus, for Social Security and Medicare for instance, you have the government count all the FICA taxes it receives in their name in income, and you use them to declare "Deficit reduced to only $163 billion!" -- while ignoring the more than $2 trillion of attached liabilities for Social Security and Medicare, present value, that accrue in the single year. (Say: "Mother of Mega-Enron", but all very simple and entirely legal, because you are Congress and you write the law.)

Add to the liability for Medicare and Social Secutity the reported increase in other on-balance sheet liabilities of $290 billion, and the one-year in increase in the net liabilities of the federal government becomes $2.384 trillion. (And there's more, the real final number is bigger yet -- I'm not counting other off-balance sheet liabilities for the likes of Medicaid, federal and military pensions and such because I don't want to become too depressed to continue).

For some perspective on the size of these numbers...

[] All federal income taxes, individual and corporate combined, in 2007 totaled $1.534 trillion. So to cover the accrual-rules single-year deficit for 2007 would have required income tax collections to have been increased to more than 2.5 times what they were (with the increase -- more than 1.5 times all income taxes collected today -- somehow "saved" in an interest-paying account in some unimaginable way).

[] The total U.S. national debt held by the public, accumulated since George Washington was inaugurated as President over 219 years ago, is $5.2 trillion. The off-the books accruing liability of the U.S. government now grows by that amount every two-and-a-half years.

Which brings us to another point, the national debt. Those who take the 2007 deficit number of $163 billion at face value are likely to do the same with the conventional national debt numbers of $5.2 trillion for debt held by the public, and $9.4 trillion including "intra-governmental debt holdings" such as bonds held in the Social Security trust fund and other such government accounts.

But the real total accrued national debt including the "implicit debt" of accruing social insurance liabilities, federal pensions and other items, is more than $53 trillion, says the Financial Report, and is growing by well more than $2 trillion annually. This implicit debt is every bit as real as the conventional national debt, if you believe the US government is obligated to pay off on the promises it has made to its citizens.

These numbers are so huge that when I mention them even generally well-informed people, including financial professionals, most often simply don't believe them. Yet they are published by the US Treasury itself every year. (It's amusing to watch people actually get angry about "George Bush's deficits" of $163 billion or so -- then go totally blank when deficits of $2.4 trillion are mentioned.)

Rationalizations appear, like: "Well, those aren't real numbers because they are over 75 years and anything can happen by then."

Not true! The government will have to start paying these liabilities with cash in a very real way starting in within 10 years. Standard & Poors projects that starting then, in only the ten years from 2017 to 2027, on current law the credit rating of the US government will plunge from AAA to "junk" . The decline of the US government's credit rating starting is 2017 is projected by Moody's too. (So much for the "risk free" US Treasury bond.) Folks, 2017 is only nine years away -- and 2027 is only 19 years away, less than two-thirds of the length of the typical home mortgage.

Another common rationalization is: "Well, there's nothing to do about it because Medicare is soooo complex nobody knows what to do about it, and Social Security is so small compared to it that there's no point in doing anything about it."

Not true again, on both counts. By the 2030s, if retirees are to be paid as promised (with the national credit collapse projected by S&P and Moody's avoided) tax increases equivalent to an over-50% across-the-board income tax increase will have to be imposed. About one-third of this will be attributable to Social Security (to finance paying down the trust fund bonds). And that will be just the start.

A 50% across-the-board income tax increase is no small thing! It's about 10 times the size of the Clinton tax increase of 1993 that passed the Democratic House and Senate by one vote. And one-third of a tax increase this size is no small thing. If we could alleviate it now -- and we could, for Social Security unlike Medicare is a simple program -- it would be no small benefit for the future. As to the other two-thirds of that tax bill for Medicare and all ... well ... if you really don't have any idea what to do about it, it's time to start thinking about it! The year 2030 is only 22 years from now, not so very far away.

So why, in this election year, are the leaders of both political parties striving to make the deficit even worse -- with more tax cuts (from Republicans) and more unfinanced spending on new entitlements (national health insurance for all, with no new taxes on anybody with income under $200,000, from Democrats)?

Because that's how they win elections. Republicans promise tax cuts, Democrats promise more unfinanced spending -- and if either admitted to the public the reality of $2 trillion+ annual deficits and income taxes going up 50% in the foreseeable future just to keep the nation from going broke meeting their old promises, neither party could do it. (You want "change" from your politicians? Admitting this reality would be change! Arguing over a summer gas tax holiday is not change.)

So, no matter how bitterly partisan politics may be today, one thing both parties agree upon in perfect bi-partisan harmony is: "Shhhh, nobody mentions accrual basis accounting for us."

And 20-odd years from now when the financial hammer comes down on the nation, with taxes going way up just to keep benefits that are already being slashed from being slashed faster, many millions of voters will be angry indeed.

But today's politicians will have gotten theirs and be gone. It will all be somebody else's problem.