So much for "Worst Economy since the Great Depression"!

At least if you believe projections of the Congressional Budget Office, Federal Reserve, and Obama Administration itself.

No matter how often you hear the phrase "worst since the Great Depression" in the media (10,000 hits via Google News) or from politicians, such as from President Obama himself…

By now, it's clear to everyone that we have inherited an economic crisis as deep and dire as any since the days of the Great Depression…

… these numbers say something very different.

The Federal Reserve has just projected unemployment peaking at 8.8%, with growth resuming in 2010.

And most optimistically, the Obama Administration's just-released budget projects unemployment at only 8.1% in 2009, and falling thereafter as average 4% growth follows over the four years 2010-2013. (There hasn't been even one year of growth over 3.7% since the 1990s.) Yes, that's starting next year, 2010, with a 3.2% GDP growth, the second-highest rate of the last 10 years!

These numbers would make the current recession worse than 1991, not nearly as bad as 1982, not as bad as 1975 -- none of which were anything like the Great Depression, of course.

So why the endless comparisons of today to the Great Depression by media and politicians alike?

Probably because they benefit by selling things to the public -- advertising and costly political programs respectively -- and "Worse Than 1991 But Not As Bad As 1982" wouldn't sell nearly as effectively. So they, well ... exaggerate.

OK, the media we understand, in the commercial marketplace it is everyone for himself and "caveat emptor".

But aren't we supposed to be able to trust our politicians? Do they not have a responsibility to be informed about the most important issues of our day ... to inform us accordingly ... and to exercise well informed and carefully measured judgment when enacting policy?

Would they really hype catastrophe to get their favored spending programs enacted in a rush, unexamined by the public?

Well, here is House Speaker Nancy Pelosi (after being officially informed by the CBO study mentioned above) warning the public that if the trillion dollar stimulus spending bill isn't enacted immediately Americans will lose 500 million jobs a month.

Anyhow ... at least one can feel better that while last month Obama was saying we're facing the worst economic crisis in 70 years, and so couldn't afford not to enact his trillion dollar stimulus for 2009, this month he's telling us we will be enjoying the boom economy of a generation starting in 2010 -- so sure, we can afford to his budget's planned spending increase of 30% by 2013 while being fiscally stringent.

And don't worry too much about the trillion dollar deficit cost of the stimulus urgently needed for 2010. We'll be able to afford it thanks to 2010's booming economy.

Baseball's steroids scandal, and a modest proposal to resolve it.


Baseball season is here again -- and with it comes the latest flair-up of the endless baseball steroids scandal. The game's highest-paid and arguably best player, Alexander "A-Rod" (now "A-Roid" or "A-Fraud") Rodriguez, has been outed as a user of steroids.

If you're a baseball fan you know how this whole steroids issue has been a disgrace to everyone involved -- the players, the team owners, the players' union -- bringing a torrent of well-earned bad publicity to the game, year after year...

The bizarre thing would be if it was all over nothing. And the ironic fact is that there's really no proof that steroids improve performance on the field at all -- and there's a lot of evidence that they don't.

There are no controlled studies of the effect of steroids on baseball performance. That means one has to look around for what second-class evidence one can find, and it is conflicting at best.

On the one hand, there is the story of Barry Bonds, baseball's indicted all-time home run king, who somehow or other improved his performance *after age 35* like no other player in the game's long history.

Yet the very singularity of Bond's performance argues against steroids being its cause -- because if steroids produce such results, during the "steroids era" one would expect to see a flood of such unprecedented performances. But they are not there. Bonds could just be the outlier likely to be found in any data set. One anecdote does not a proof make.

Studies of actual baseball performance generally find no evidence that steroids improve it. For instance, a study of all the players identified as users in the Mitchell Report "suggests that in most cases the drugs had either little or a negative effect". [NY Times]

And broad studies of all players by era find no general improvement in performance in the "steroids era" that is attributable to steroids (as opposed to other factors such as league expansion, changes in equipment and rules, etc.). So the bottom line may well be that Major League Baseball, the baseball players and their union may have inflicted all this damage on themselves for ... nothing.

Think about it: Players have been indicted ... the owners have damaged the reputation of their multi-billion dollar business ... the players union has publicly hardballed in defense of wrongdoing members and been credibly charged with violating both a court order and its contract by warning players about drug tests ... Congress has held hearings and theatened government intervention ... yet nobody knows if steroids actually work. (Rodriguez, one of the world's highest paid atheletes, says he took steroids on the expert advice of his cousin Yuri, his "personal driver and lackey".)

How to find out? Easy!

A modest proposal: Run a long-overdue controlled, double-blind test on the effects of steroid use on performance in pro baseball. Take, say, 100 players and give them as much juice as they want (legally, with a doctor's prescription) -- but with only half of them getting the real juice, the other half getting a placebo, and nobody knowing who's getting what, not even the testers. Let 'em all play a season and then tally up the results. They'll be easy to compute. (If you don't want to do it in the major leagues, do it in the minors. The results would be just as clear. )

Then everyone would know the truth, once and for all -- and have a much better picture of the integrity of baseball's records, and of what does and doesn't need to be done to protect the game going forward.

The five states that sank the world economy.

And whose homeowners will be being bailed out by taxpayers in the other 45, under the Obama Administration's mortgage bailout plan: 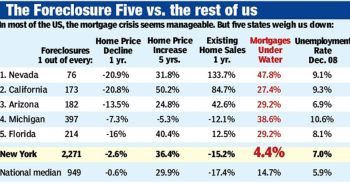 Neanderthals for the heart?

How about adding this to the stimulus package, if we really want to spend money...

By next Valentine's day, provide a real Neanderthal Man to every woman who's grown tired of her metrosexual boyfriend and wants one. The NY Times reports...

Scientists report that they have reconstructed the genome of Neanderthals, a human species that was driven to extinction some 30,000 years ago...

Dr. George Church, a leading genome researcher at the Harvard Medical School, said Thursday that a Neanderthal could be brought to life with present technology for about $30 million.

Hey, $30 million for the first one isn't so much. After that they'll be cheap.

In the meantime, it's settle for Valenswines. 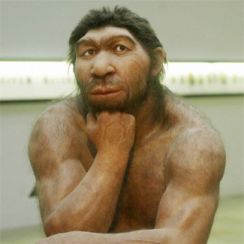 "Now we are confronted with an even larger lapse by Mr. Daschle, who failed to pay $128,000 in taxes, primarily for personal use of a car and driver provided to him by a private equity firm ...

"Only after the Obama transition team flagged unrelated tax issues that would require filing amended returns did Mr. Daschle and his accountant address the need to report the personal use value of the car service — more than $255,000 ..."
-- New York Times.