Some "great expectations" for 2008, by the supposed great and knowing, about:

The world of sport... 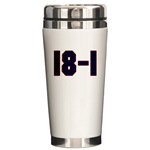 ... please be aware that the New England Patriots already have won their fourth Vince Lombardi trophy in seven years ... Crown them. We know exactly who the Patriots are: the perfect football team.
-- Jay Mariotti, Chicago Sun-Times, 1/14/2008

After the Patriots filed for a trademark on "19-0" in anticipation of a Super Bowl victory capping a perfect season, they lost and wound up donating hundreds of "19-0" T-shirts to poor children in Nicaragua and Romania, thus developing new generations of Pats fans around the world. Meanwhile, the the NY Post applied for a trademark on "18-1", and it's still not too late to get yours.

NORTH POLE ICE MAY MELT IN TOTAL, IN SUMMER 2008
CBS News Video, with former British PM Tony Blair urging the US to take all this seriously.

A British explorer unveiled plans on Tuesday to kayak all the way to the North Pole to expose just how quickly the ice cap is melting ... scientists predict that due to global warming, this year might be the first when someone could do so.

"I'm going to try and get all the way to the North Pole to show the world what is happening," 38-year-old Lewis Gordon Pugh said after launching his Polar Defense Project expedition on the River Thames in London.

He didn't make it (getting stuck in ice in what was navigable clear water in 1922).

“If [Hillary Clinton] gets a race against John Edwards and Barack Obama, she’s going to be the nominee. Gore is the only threat to her, then. … Barack Obama is not going to beat Hillary Clinton in a single Democratic primary. I’ll predict that right now.”
—William Kristol, Fox News Sunday, Dec. 17, 2006.

But, of course, 2008 was of the Year of the Money Quote. So many possibilities, so little bandwidth...

(OK, that wasn't strictly a prediction -- but who knew the master of the world's first $50 billion Ponzi scheme had a sense of humor?)

"I think this is a case where Freddie Mac and Fannie Mae are fundamentally sound. They're not in danger of going under…I think they are in good shape going forward."
- Barney Frank (D-Mass.), House Financial Services Committee chairman, July 14, 2008

"I expect there will be some failures. I don't anticipate any serious problems of that sort among the large internationally active banks that make up a very substantial part of our banking system."
- Ben Bernanke, Federal Reserve chairman, Feb. 28, 2008

"Existing-Home Sales to Trend Up in 2008"
- Headline of National Association of Realtors press release, Dec. 9, 2007

"With the U.S. dollar up and oil down and businesses investing, I think (the) Goldilocks (economy) is back in business."
- Larry Kudlow, Aug. 28 on CNBC's "Kudlow & Company"

"Emerging markets are now the global investors' safe haven of choice."
- Worth Magazine, April/May 2008. [Emerging market stocks fell 50% from then to December.]

"Stock investors should 'beat the rush to the banks'."
- Kiplinger's Personal Finance Magazine, November 2008
[Follow up: "At least all our picks are still in business." -- Elizabeth Ody, author of the article]

"Garzarelli [president of Garzarelli Capital] is advising investors to buy some of the most beaten-down stocks, including those of giant financial institutions such as Lehman Brothers, Bear Stearns, and Merrill Lynch. What would cause her to turn bearish? Not much. ‘Our indicators are extremely bullish.’”
- Business Week's Investment Outlook 2008
[All gone now!]

And, of course, anything by Jim Cramer (sooo little bandwidth!)

"I think Bob Steel's the one guy I trust to turn this bank around, which is why I've told you on weakness to buy Wachovia."
- Jim Cramer, CNBC, March 11, 2008

Remember in 2009, and learn therefrom.