This blog has moved


This blog is now located at http://blog.scrivener.net/.
You will be automatically redirected in 30 seconds, or you may click here.

For feed subscribers, please update your feed subscriptions to
http://blog.scrivener.net/feeds/posts/default.

For those who still visit here in spite of the recent lack of posts, here's the reason for the lack of posts:

Blogger recently announced it is discontinuing support for the ancient publishing method this blog has used since 2004 (the Paleolithic era in Internet time), requiring the blog to be ported to a new location to keep publishing. And frankly -- in spite of all the fun I've had with this thing over the years -- I don't think it is worth it.

It's been a kick for the ego to on (rare) occasion get thousands of hits in a day after being linked to by an uber- or mega-blogger. And much more rewarding than that has been the personal interaction I've had with readers -- you know who you are, thank you all.

But that said, this blog started as a crude simple experiment way back when, and has never progressed beyond that level. As a self-employed professional, I avoided writing about anything involving my professional expertise, to avoid exposing clients and potential clients to excessively candid examples of my addled thinking (and also kept my name off the blog -- not that it is a secret).

That's worked as intended, but necessarily has left me writing about subjects I don't know anything about. Well, that's been a benefit, I admit -- it's a lot more fun to write unconstrained by facts and knowledge. That seems to one of the primary purposes of the Internet.

Still, the result has been an anonymous blog, relating no particular expertise, on subjects randomly moving from this to that.

Which, of course, also means one with only a small readership, if a loyal one (I can tell from the logs) of like-minded souls (what's wrong with you?) who stumbled upon it one way or another, and for some reason decided to come back.

To you all I say thank you, and adieu. This will be the last post of the Scrivener.net blog. The archives will remain, and the "scrivener.net" address will remain live and perhaps active, if only because I've paid for it so far in advance. How it may mutate I can't say.

It is just possible that I may apply what I've learned here to a new blog, one that will be much more professional and focused (one hopes) ... but the future is unknown. If that happens, I will leave directions to it here.

Until then, thank you all and good luck to you. I'll be seeing you around the Web (and in other blogs' comments).

To save the Earth, grow the economy faster ... faster! 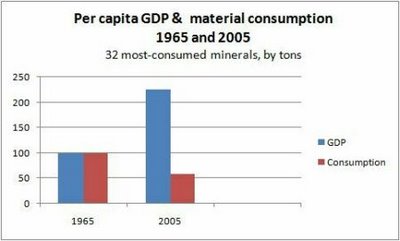 Because the richer we become, the less of the physical world we consume.

If only Enron and Arthur Andersen had been providing national health care...

... By April 2005, when Bextra was taken off the market, more than half of its $1.7 billion in profits had come from prescriptions written for uses the FDA had rejected.

But when it came to prosecuting Pfizer for its fraudulent marketing, the pharmaceutical giant had a trump card: Just as the giant banks on Wall Street were deemed too big to fail, Pfizer was considered too big to nail.

Why? Because any company convicted of a major health care fraud is automatically excluded from Medicare and Medicaid. Convicting Pfizer on Bextra would prevent the company from billing federal health programs for any of its products. It would be a corporate death sentence.

Prosecutors said that excluding Pfizer would most likely lead to Pfizer's collapse, with collateral consequences: disrupting the flow of Pfizer products to Medicare and Medicaid recipients, causing the loss of jobs including those of Pfizer employees who were not involved in the fraud, and causing significant losses for Pfizer shareholders.

"We have to ask whether by excluding the company [from Medicare and Medicaid], are we harming our patients," said Lewis Morris of the Department of Health and Human Services.

So Pfizer and the feds cut a deal ... Prosecutors say there was no viable alternative.

"If we prosecute Pfizer, they get excluded," said Mike Loucks, the federal prosecutor who oversaw the investigation. "A lot of the people who work for the company who haven't engaged in criminal activity would get hurt."

... In all, Pfizer lost the equivalent of three months' profit.