Was I unduly harsh about a week ago referring to the former Eastern Germany's famous "people's car" the Trabant?...

People say a million of them were junked The Day The Wall Came Down. ( "Designed as a three-wheeled motorcycle, the decision to build a four-wheeled car came late in the planning process"*)

... Well, that was then. Today the Trabant, Time Magazine's #27 all-time car, is beloved in Germany by the masses (who no longer have to drive it) for all its unique qualities.

Indeed, the Trabant proves that darn near anything can be beloved when it is not forced on people -- and that for whatever is beloved by somebody, there is a market and a profit-making opportunity for somebody else, as the BBC tells us: 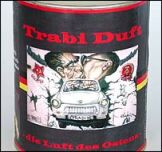 Due to the engine being of a two-stroke variety, exhaust emissions were high in pollutants and also had a very distinct smell. Instead of the normal petrol smell common to four-stroke engines, the Trabant's exhaust gave out a burnt oil smell as well as emitting blue smoke....

One Thorsten Jahn decided to 'can' the smell of a Trabant exhaust and sells it on his website. In a news report to the BBC he says, "The smell is something very special and scarce nowadays"... Price: 3.98 euros.

Cans of "Trabant smell", priced via the economics of diamonds: Nobody has to have them, but if they are scarce and some people want them then there will be a price for them.

That smell is so beloved today that the Trabant has been exempted from Germany's tough anti-pollution laws. And it is not so scarce. Seventeen years after the last one was built, more than 50,000 are still on the road.

Trabants today cost from 1,000 to 10,000 euros depending on condition, these reports say. That's up to about $15,000 for a car somewhere between 17 years and 51 years old with a two-cylinder, two-stroke engine.

For the old their lure is nostalgia, remembering the days of youth. For the young, it's a whole new thing, "cheap-chic hot rod culture"....

When windmill repairman Martin Teucher drives to work before dawn, it's the thumping bass in his Trabant's backseat that keeps him awake, not coffee.

The 24-year-old from the eastern village of Bruchmuehle has tuned his 1980 "Trabi", the smelly two-cylinder symbol of communist East Germany, into the hip-hop generation with a booming sound system and lowered suspension. Stuck to the plastic bumper is a placard reading "DDR".

Fifty years after the first Trabant rolled off an assembly line on November 7, 1957, the boxy vehicle has become the focus of a cheap-chic hot rod culture. "It's gone from hobby to cult to insanity," Mr Teucher said...

"If we put my car on the Alexanderplatz with a Porsche next to it everyone would ignore the Porsche"... [Reuters].

I believe they would! 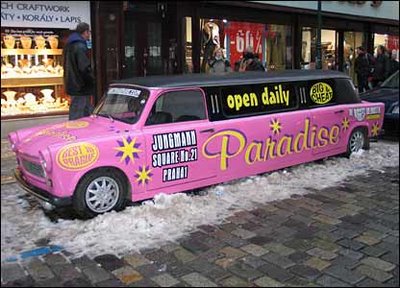 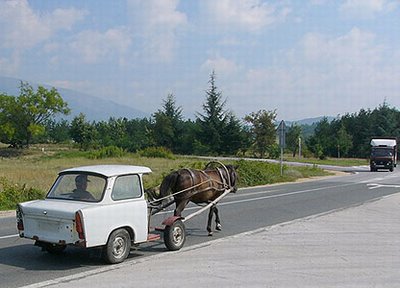