The Shame of the World Trade Center "reconstruction" site, III.

"If we don't build the most obscenely grandiose subway stations in the world, the terrorists will win!

"So forget rebuilding the dang towers..."

Among many reasons, one of the biggest is the battle for bucks between Larry Silverstein, the real estate developer who owns the lease to the WTC properties, who actually wants to rebuild the towers, and the government transportation agencies that want the money to "rebuild" for themselves mega-sized, mega-cost "wonder of the world" ... subway stations.

This blog previously mentioned the New York's Metropolitan Transit Authority's disastrous bungling of the Fulton Street Cathedral station it is "rebuilding", six years behind schedule and $650 million (87%) over budget so far -- $1.4 billion total and counting -- sucking those millions from funds the federal government provided to rebuild the WTC area. But as the station and its infrastructure stretch far underground in all directions, other building waits (and has to be re-designed, and re-designed again) as its delays and re-workings continue.

But the big crisis that's coming to a head is courtesy of the Port Authority of New York and New Jersey, which is on the other side of Silverstein's lease. It is outright blocking construction of two of the three towers slated to be built on the WTC site because it doesn't want to put up its share of the money, for which it says it has better uses.

Silverstein just warned that he's about to break off the endless negotiations with PA and invoke his right to go to arbitration. And the PA shot back...

"It's unfortunate [Silverstein] is walking away from the negotiating table simply because the public has been unwilling to sacrifice critical transportation projects to subsidize private speculative office space," said PA Executive Director Chris Ward.... [NY Post]

What are the "critical transportation projects" that the PA deems so much more important than rebuilding "private speculative office space" in the business district of Manhattan? The big one is ... it's own subway station!

But not just any subway station -- the PA's own "PATH train" station for trains that run under the Hudson River to New Jersey, which makes the MTA's Fulton Street Cathedral look like a monk's cloister by comparison in all relevant ways: in terms of size, design grandeur, cost, cost overruns and delays...

Everyone knows the Port Authority's planned World Trade Center Transportation Hub is huge. The PA celebrates the fact, boasting on its Web site that the Hub "is comparable in size to Grand Central Station" ... but is is actually, and absurdly, much bigger than Grand Central's main hall, as the drawing shows. 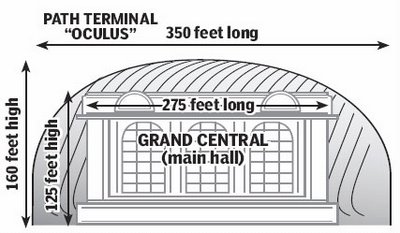 This, even though the Hub will serve vastly fewer users than Grand Central.

The PA project is obscenely grandiose -- an elephantine edifice that likely can't be built even for its (already way-over-budget) $3.2 billion price tag. It might never be completed at all -- yet the complexities arising from its vast scale bedevil everything around it at Ground Zero.

Recent news articles have predicted the cost could top $4 billion ...

The Hub is an unconscionable waste of precious Ground Zero earth, money and energy. For starters, it's still basically just a new PATH terminal, serving a relative handful of commuters. Again, the drawing helps make the point ...

Their respective dimensions give you the picture. Grand Central's main hall is about 275 feet long, 120 feet wide.

Meanwhile, the Oculus -- the Hub's main public space, officially called the Transit Hall -- is 350 feet long and 145 feet wide at floor level, which is two levels below the street. It tapers to a "mere" 320 feet long by 100 feet wide when it reaches street level.

At its tallest point, the Oculus is 160 feet tall from the floor to the skylight roof. Grand Central is 125 feet high at its apex. ... And the Oculus represents only about half of the Hub ...

All that floor space and volume -- for what?


For perspective, the Freedom Tower, the main tower at the WTC that Silverstein is building, has a cost of $3.1 billion. The cost of the PA's PATH station is now up to $4 billion.

Here's a recent estimate of delays and cost overruns for various elements of the WTC rebuilding project.

Hey, the Empire State Building, from first turn-of-the-shovel to grand opening, was built in 470 days. Don't think about it.