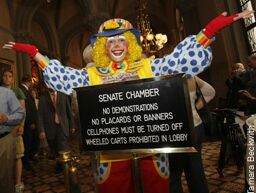 Democrats and Republicans remain deadlocked 31-31, with each refusing to do any business with the other, leaving the government paralyzed. [How we got here.]

[] When a Republican seeking a Coke walked through a chamber where the Democrats were meeting to get to the senate lounge, the Democrats claimed that his minute spent walking through them gave them a quorum -- and they "passed" 121 bills.

[] The law authorizing the current management structure of the New York City public school system expired at midnight. Management of the schools serving 1.1 million students has reverted to a Board of Education and 32 community school boards that haven't existed since 2002.

Law extending the current management structure of the school system has been passed by the State Assembly (Democratic), and its passage by the Senate has been urged by the Governor (a Democrat) and even by the teachers union, and 45 of the 62 senators are on record supporting it. But the Democratic senate "leaders" (if one may call them that) are blocking it ... why?

[] As to our Accidental Governor's contribution to the show...

Just after midday, Gov. Bumble called us into a room to announce good news. Enough senators -- finally! -- had joined together, after nearly a month of this Clown College on the Hudson, to pass some bills. Hooray!

But within five minutes, the Clown-in-Chief changed his mind. Right there, I witnessed the most surreal event I've ever seen in a press conference.

Two minutes later [after hearing about the can of Coke] Paterson came back, looking as if he'd been kicked...

"I will not sign any legislation passed," said Gov. Bumble, looking as if he desperately needed that margarita ... give this man a drink. [NY Post]


I can't wait for tomorrow's highlights!