The Obama Administration says "excessive growth" in health care costs threatens the government's future fiscal solvency, as the amount it has to pay for Medicare and Medicaid every year goes up, up, up.

So in lobbying to get its national health care program enacted it is arguing against all experience and logic that indicate putting the cost of more health care on the government's bill will be an extra fiscal cost, to claim that national health care is needed to reduce this dangerously excessive growth rate of health care costs. As its lobbyists and advocates are putting it, "Health Reform is Budget Reform".

But are US health care costs really rising at an excessive rate?

Data that say "maybe not!" come from Andrew Biggs. He looked at the "excessive growth" in health care costs (the amount by which they grow faster than GDP) in 23 OECD countries since 1990, and found an average of 1.62%. The rate of excessive growth in the US: 1.66% -- almost exactly the same.

The US's "excess growth" rate ranked ninth of the 23. If the national health care advocates' goal is to get this excessive growth rate down to the level of France (held up as a model by Paul Krugman) or Britain (which exerts direct government control over hospitals and medical services) the rate will go up to 1.87% (France) or 2.08% (Britain).

But if the fiscal problem with health care costs isn't their growth rate, what is it? It's their base amount to which the growth rate applies. Prof. Mankiw gave us a heads up on this just a little while back, quoting this data.... 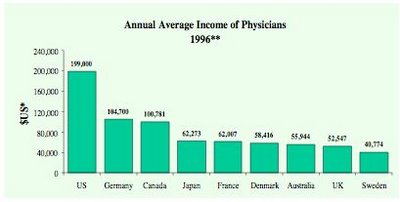 Addendum: These broad issues apply not just to doctors but to other skilled healthcare workers as well. If you look here, you will find that dentists, nurses, and physiotherapists are also paid more in the United States than in other nations...

Read his whole post. There might be reasons why the US wage rate for the health profession is higher than elsewhere.

But in any event, if you think the cost of health care in the US is too dang high, the "bogeyman" you have to deal with to fix things is not the rate at which health care costs are rising here, that's world-normal -- nor is it the profits of greedy insurance companies, nor their high overhead, nor "wasteful competition"...

And not just doctors' incomes, you'll also have to slash and control the incomes of nurses, medical technicians, and of members of the United Health Care Workers Union.

Does the plan being bandied about by Obama and the Democrats address any of this? Do any of its advocates?

It's kind of ironic how national health care is being sold using such a misdiagnosis.