MV=PQ in pictures. Or: If the money supply is rocketing up, how can deflation be a danger?

This is a question circulating in various discussion forums, for instance...

Supposedly, we are now descending into deflation ... My question is: where did the money go? We have seen major inflation over the last 5 years (housing and commodities), which is, as we know, a monetary phenomenon - the Fed has run the printing press full blast, with their 'easy money' policy.

Now, bust follows boom, and prices fall ... but the money is still out there, yes/no? Demand should be constant, with boatloads of bux chasing goods ... where are all the dollars? How can general price level drop?

OK, a fair question: If inflation (and deflation) are "always and everywhere a monetary phenomenon", as Milton Friedman famously put it, how can the quantity of money and the price level go in opposite directions?

The answer is that since economic activity is an ongoing process, what matters for the money supply is not merely the quantity of money but also the number of times it turns over, changes hands, within a given time period: it's velocity.

From that simple equation it's easy to see that if M stays even, then should V decline either prices must fall (deflation) or the quantity of goods exchanged in the economy must decline (recession) or both. In fact, even if M rises, should V fall by a more than offsetting amount, then either P or Q or both still must fall.

So the mistake in the quoted query is the phrase: "Demand should be constant, with boatloads of bux chasing goods".

Rather, something happens to cause a big increase in the demand for money, which causes people, banks and businesses to hold on to it longer rather than risk it by lending it to those who may be unable to repay, or invest it in businesses that may produce low returns or fail. So money changes hands less often and V declines.

Let's see what's happened to V lately (or rather, a proxy* for it): 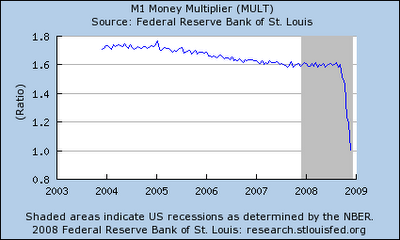 Oooops, off the cliff! Hold M steady with that, and you get the Great Depression. Which was what we got the last time we saw such a thing.

In the Great Depression the great economy killer was deflation -- 25% deflation in the US over three years. That is, the purchasing power originally in $100 wound up in $75, so the real value of a dollar rose by 33%. That's what crushed the economy, the difference that turned a normal recession into Vastly Worse.

To see why, imagine you are a business owner initially paying 6% on $100k loan. Then, while your income is down and business is slumping due to the recession, you find yourself paying in real terms relative to your original borrowing 8% interest, and after paying that you are stuck with a principal debt that has shot up a full third to around $133k. (The real value of the dollars you have to repay has risen 33%).

You can't repay that so you go bust, and when all the other businesses like yours go bust the bank goes bust. As banks start going bust people generally decide not to save their money in banks anymore (especially when their money is gaining value when stuffed in their mattresses or buried in their back yards, why risk putting it in a bank that may go bust?).

So 10,000 banks go bust (literally), and even the surviving banks can't loan out money (they need to keep cash in their vaults to be able to pay all the depositors who may want their money back) or won't loan out money (because they can't find enough borrowers not at risk of going bust).

V drops off a cliff, the economy collapses 30% and you get 25% unemployment.

How to stop that? Fed Chairman Ben Bernanke (who in his academic life was a specialist on what caused the Depression) knows the answer: make M rise by as much as V falls.

Here's how M been doing lately? 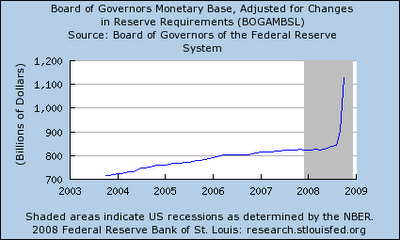 It's up like V is down, offsetting V's fall. Ben's got his printing presses running overtime, with new ones on order.

The result is that inflation is still positive and within the normal range for recent years... 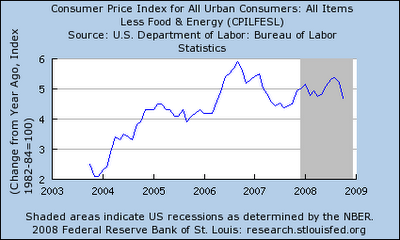 ... and if necessary you'll see Ben have the Fed dropping money from a fleet of helicopters, as Friedman once suggested, to keep it that way. As long as inflation stays in that range, positive, it may be recession "yes", but will be another Great Depression, "no".

Milton Friedman said that the Fed caused the Depression by letting the money supply collapse in the 1930s, and Bernanke on taking over at the Fed agreed it was true and apologized for it...

I would like to say to Milton and Anna: Regarding the Great Depression. You're right, we did it. We're very sorry. But thanks to you, we won't do it again.

That second graph shows how he's trying to keep that promise. Watch the third graph in coming months to see how he is succeeding.

(* As Steve correctly notes in the comments, the multiplier is different than velocity, it is a picture of the money supply at a given point in time while velocity is turnover of the money supply measured over a period of time. But they are directly related. Velocity causes base money to be deposited in a bank, then be lent out and deposited again, and then again ... so that the final tally of deposits counted in a higher measure of money (such as M1 or M2) is a multiple of the initial amount -- shown in the "multiplier". The higher the velocity the more lending there will be, and the higher the multiplier will be. The lower the velocity the less lending there will be -- with more money kept in mattresses and vaults rather than lent -- reducing the multiplier.

I used the chart for the multiplier because FRED didn't have a similarly nifty chart for velocity.)