News of the World

In case you missed it...

From the Austrian Alps: Mountain survival gear by Victoria's Secret.

An American hiker given up for dead was rescued from the side of a mountain when she alerted rescuers of her whereabouts by throwing her bra into a cable car.

Jessica Brown had fallen off a ledge in the Austrian Alps and was stranded injured for 70 hours in freezing temperatures. Mountain rescuers had been looking for her but gave up because they believed she had fallen to her death.

But the 24-year-old spotted a cable car on its way up the mountain in Salzburg and managed to take off her underwear in time to fling it. Luckily, her bra landed inside the cable car...

"It certainly beats sending up a flare", said one rescue worker...


From Russia: A monument to enemas!

A monument to the enema, a procedure many people would rather not think about, has been unveiled at a spa in the southern Russian city of Zheleznovodsk. The bronze syringe bulb, which weighs 800 pounds and is held by three angels, was unveiled at the Mashuk-Akva Term spa, the spa's director said Thursday. 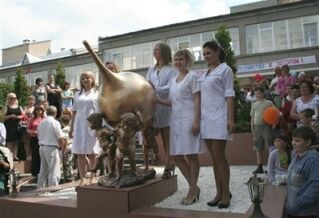 "There is no kitsch or obscenity, it is a successful work of art," Alexander Kharchenko told The Associated Press. "An enema is almost a symbol of our region."

From the incredible shrinking Japan:

... this is the land of disappearing children and a slow-motion demographic catastrophe that is without precedent in the developed world ... Japan, now the world's second-largest economy, will lose 70 percent of its workforce by 2050...

From the World's Ugliest Dog Contest: A winner!

Gus the dog has three legs, one eye, no hair except for a white tuft on the top of his head, and also suffers from skin cancer ...

Said Jeanenne [his owner], “I’m just in shock. We came so far and are so happy that we can put the winnings towards Gus’ radiation treatment...."

From the world of artistic criticism: The movie review of the week.

"It's time to take Shyamalan out back and kick the shit out of him."

From Switzerland: Where the kids don't know history and blame it on the Internet.

A Swiss television channel has apologised after it mistakenly broadcast the Nazi lyrics to the "Deutschland, Deutschland über alles" anthem during a Euro 2008 football match. Fans were invited to sing along as the subtitles appeared on Swiss screens.

Managers at the channel blamed the mistake on inexperienced researchers copying the wrong lyrics from the internet before the match began.

From Windsor Castle: Where apparently they really do have a dancing queen.

Queen Elizabeth II stunned guests at a Windsor Castle bash by getting up to boogie -- to Abba classic Dancing Queen. The 82-year-old monarch says she loves strutting her stuff to the disco hit, DJ Chris Evans revealed...

The presenter said the Queen told guests around her: "I always try to dance when this song comes on because I am the Queen and I like to dance." 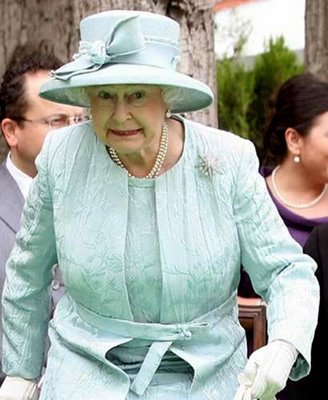