New York City is not America. America starts just west of the Hudson and extends to somewhere a bit east of Hollywood. But every now and then America comes to New York.

During this past week America sent a naval expedition to New York City via Fleet Week. Small groups of sailors in their dress whites have been bobbing through the street crowds all over town. 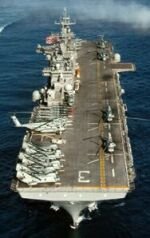 The navy must not give them any guidance or direction because they've seemed to be randomly distributed all over the place, in locales where there's certainly no reason for a tourist to go. This sight is strange to New Yorkers. When New Yorkers visit, say, Washington DC -- that is, America -- take a subway ride there and see people in military uniforms, even generals and admirals, sitting on the train seats reading the paper just like they are normal people going to and from work, it's a bit of a shock. Military people just aren't seen as normal people (both literally and figuratively) here in Manhattan -- not like in Washington DC or Texas or San Diego ... America.

Well, when the American fleet's sailors hit town you know for sure they are not New Yorkers, and that the navy doesn't give them any more money than street guidance, when a group randomly bob into my local pub (one of the last family-owned local Irish bars in lower Manhattan that can fairly be called that) and you hear: "... beer costs how much? Don't you have any with American names? Budweiser costs HOW MUCH? "

Culture shock is just as great the other way. The big ship in town hosting the public has been the USS Kearsage, (pictured above) a big aircraft carrying, hovercraft carrying assault ship, loaded up with all the guns, light tanks, artillery and such that you'd ever want to pour onto an enemy beach. You walk on board, are greeted by marines and sailors who are kids, 18 or 20 years old (much younger than New York police, the only armed uniformed force New Yorkers are familiar with) and you see how they love their guns.

A parent bringing children on board -- OK, most of us adults were there to keep our kids from punishing us for not taking them -- has a friendly, smiling marine greet them right away with "Hi, junior, what's your name? ...Well, Johnny, have you ever held an assault rifle before? Here, see how light it is? Your Super Soaker weighs more when it's loaded with water. Now try the trigger...." I mean, this before watching parents in freaking politically correct New York "there can never be enough gun control" City. Ten-year, eight-year, six-year olds being introduced to the joy of assault rifles. If Bloomberg had visited he'd have shat. And the smiling parents all enjoy it and get a kick out of it. (Well, being the kind of parents who bring kids on board a navy assault ship for a holiday.)

Next display, the machine guns. The marines have a landing craft rigged up with all kinds pointing out in all directions. The little kids get lifted up there and rush right to them. (My 13-year-old went up too but "I only looked at the engines and steering, I didn't want to keep the little kids from having fun").

Have you ever seen a 7-year-old pointing a .50-calibre machine gun and getting instructions on how to shoot it? "You pull this bolt back and the action works like this. Yeah!" To a 5-year old on a MK19: "Well, maybe that's too heavy for you, let's try this M249". And the parents down on the main deck are loving it, shooting off the flashes of their digital cameras like paparazzi catching Lindsay Lohan and Paris Hilton on a double date. "C'mon, José, point it at mommy and smile!" All except dumbass me, who forgot to bring my camera, or even my cell phone. So I missed a hundred great pictures to illustrate this tale (and have only the one on the right from a local newspaper.)

Well, my kid skipped the machine guns but wasn't disappointed because he got ahead that much faster to try out the "virtual reality" machine. We're not talking about something from Nintendo here -- this is an industrial Pentagon research-strength helmet-and-surround sound system that "puts you there". Flat-screen monitors stationed about display what the helmeted-one experiences. He's standing on a road, a 16-wheeler comes roaring down it and, although he knows he's standing on the deck in the interior of a ship, he hurls himself out of the way. Junior they placed on the edge of a cliff among several other people looking down, then the cliff edge started to crumble and the person next to him fell off and down. He said it made him totally sick to his stomach -- a two-minute experience worth the entire trip!

On the way out we passed a lonely, classic M2 .50 caliber "Ma Duce" machine gun. The little kids being elsewhere, this one Junior had a chance to try out. He's become a fan of engineering from watching some of the better cable TV channels, so I started to tell him about how the M2 is one of the great design and engineering achievements of last 100 years. It's original design and construction was so perfect that it is still being used virtually unchanged since the days shortly after World War I, and the military is still using stocks of it manufactured decades ago.

A passing marine, maybe 18 or 19 years old, overheard me and changed course to jump into the conversation. "You know your weapons, sir! This particular version of the M2 has been in use unchanged since 1954". We had a friendly little talk from there and I asked if he'd had any chance to enjoy the city. He said he loved the city, and "I'm moving here next year!" Really? Was he mustering out, or getting married to someone here? He said, "No, the marines have a small outpost in the city in Brooklyn and I'm going to be stationed there, I'm really looking forward to it."

Well, the fleet's sailed off now and he's gone with it. I wish them all nothing but the best. And the next time the fleet hits town I'm going to try to remember to bring my camera.