Know your enemy -- maybe a little sooner. The Harvard Psychological Clinic had Adolf Hitler all figured out ... in 1943.


Who has the most fun with numbers? Do economists really lack the personality to be accountants? It could be true!


Doubleplusgood! Individuals are poor at making choices, so the government and businesses should relieve them of the burden, some say...

Mr. Thaler and Cass Sunstein of the University of Chicago Law School suggested that it is proper for the government, or an employer, to set boundaries to choice to achieve desired social objectives, an approach they call "libertarian paternalism." [NYT]

For men who aren't happy with what they've got. The German remedy (as noted here previously) is to grow two where there was one. (Some tact required with the spouse!) The Russian approach is to move one to where there was none. (Long sleeves required?) [Update: For all you 'only seeing is believing' types, here -- although I was just as happy with the text-only version of this tale.]


Why living in the mountains is dangerous. If the avalanches don't get you the artillery will.


Celebrating the arrival of baseball... 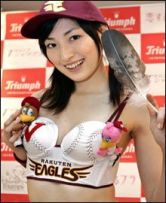 An underwear maker on Friday celebrated the birth of Japan's first new professional baseball team in 50 years with a commemorative bra shaped like baseballs that features team mascots both inside and out.

The bra is made of synthetic leather and has dolls of the expansion team Tohoku Rakuten Golden Eagles' furry mascots "Clutch" and female "Clucchina" clutching the side of each bra cup turned baseball.

Completing the theme, the inside of the bra is trimmed with a real eagle's feather... [AFP]

So what are they doing in Washington, DC, to celebrate the arrival of the Gnats Nats?