We're not just talking about coyotes down here in lower Manhattan, where I live. ("Hey, kids, go out to the park and play!") 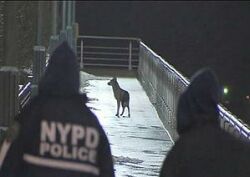 Once a source of national leaders of both political parties, New York state has descended into a bizarre, riveting spectacle of corruption and political debasement ... [Politico]

Paterson, Rangel, Spitzer, Hevesi, Meeks, Estrada ... Illinois has nothing on us!

OK, we also produced Tammany Hall with Boss Tweed, Senator George Washington Plunkitt (of "honest graft" fame), Mayor Jimmy Walker ... and arguably they were much more truly New York than that Caribbean import Hamilton and those English bluebloods the Roosevelts.

So maybe we're just getting back to our animal roots around here.

If Joe Francis ever wants to start a "Politicians Gone Wild! Doing It ALL!" spin-off, here we are. (Judging from his record he'll fit right in among 'em. He could move here and run for office himself.)