"Rising health care costs" are not the cause of the coming fiscal crisis.

The 2009 Trustees Reports for Social Security and Medicare are out, and the news is not good. Details will be discussed later. But already the left side of the polito-sphere is applying its spin to them, most succinctly by Robert Reich...

Social Security is a tiny problem. Medicare is a terrible one, but the problem is not really Medicare; it's quickly rising health-care costs.

These statements are false, false and false.

First, let's quantify how "tiny" the Social Security problem is:

The Trustees say that the cash flow expense of Social Security benefits will increase as a cost against general revenue by 1.9% of GDP from 2007 before stabilizing around 2040. This reflects a change from contributing 0.6% of GDP to general revenue (the surplus) to being an expense against it of more than 1.3% of GDP (to service the Trust Fund) in 2030 and later.

(2007 is taken as the base year because it is the last in which numbers weren't temporarily --we hope! -- distorted by the recession. Measured from 2009, with its recession-reduced payroll tax revenue, the future general revenue cost of Social Security rises by "only" 1.43% of GDP ... from a starting point of a $1.8 trillion deficit!)

How "tiny" is a 1.9% of GDP hole in the budget? And the revenue increase needed to plug it?

In 2007 total income tax collections (personal and corporate) were 11.2% of GDP. So increasing taxes by 1.9% of GDP to stay even with the cost of Social Security would require a 17% across-the-board income tax increase on everybody (including retirees).

Anybody who uses the word "tiny" to describes 1.9% of GDP hole in the budget, requiring a 17% across-the-board income tax increase, is trying to sell you a bill of goods. No tax increase close to this large has been enacted since the end of World War II. [.pdf]

Next ... Medicare. Is it true that the budget problem "is not really Medicare", but only the rising cost of the medical expenses that Medicare pays?

Total spending on Medicare is projected to more than double from 2007 to 2030, from 2.7% of GDP to 5.9% of GDP -- and more than half of that increase is due to increasing number of retirees getting benefits at today's level, not increasing cost for medical procedures.

I'm going to skip exact numbers here to go right to a visual aid provided by the Obama Administration that summarizes all this. 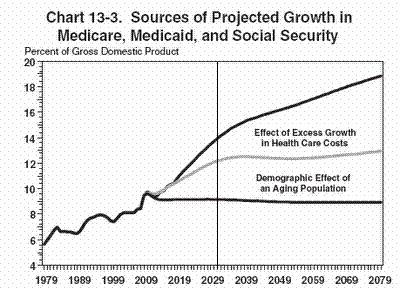 This chart, from the new Analytical Perspectives On The Budget, shows just how much of future rising budget costs will be due to increasing number of retirees versus increasing cost of medical services, in the estimation of the Obama budget office.

Look well. See that the claim by Reich and others of the left that the coming budget crisis is due to "quickly rising health-care costs" is true only after the 2040s, more than 40 years from now!

I've drawn a verticle line on the chart at the year 2030. At that point "aging population" dominates the increase in costs by just as much as "growth in health care costs" does in 2079.

Why did I put that line at 2030? Because at that point already a 50% income tax increase (or the equivalent, such as a new national sales tax) will be required to stay even with the costs of Social Security, Medicare and Medicaid.

And hard, cold, political reality is this: there is not a chance on this green Earth under our shining Sun that a 50% income tax increase on everybody, individuals and businesses (or some equally dramatic tax-raiser such as a new national sales tax) will be enacted without major cost-controlling re-writes being legislated into these programs as part of the bargain -- making projections of far-distant medical expense in the 2050s, 2060s, 2070s, totally moot and meaningless.

We have precedent. In 1983 Social Security ran out of money, and Congress then closed the funding gap it faced for coming years half with tax increases and half with benefit cuts. It will do it again. On a vastly larger scale. So much for benefit projections after then!

The fiscal crisis is going to come in the 2030s ... it is going to be dominatingly due to the growth in the number of retirees (not any increase in the cost of medical procedures) ... which means due to Social Security and Medicare as they are today ... and that crisis will drive the major reform of these programs. What the world will be like after that, we have not a clue.

To paraphrase Butch and Sundance, there's no point in worrying about not being able to afford the 2070s, because the 2030s are going to kill us.


These facts speak for themselves. For Reich and those on the left like him to go into simple denial about all this is plain disengenuousness.

Why do they do it? Purely as a political strategy to frame issues for the next election or three. The political objectives of the left are:

(1) To keep Social Security exactly as it is, for political reasons, whatever problems may be coming down the road at it. (Since it would be very bad politically for Democrats to go to the AARP and say, "You know, all those things we've always told you about Social Security, they aren't exactly true.")

The framing sleight-of-hand: "Look at those huge long-run medical expenses in the 2060s and 2070s. See how they drawf Social Security's problems in the next 20 years" ... leads to: "So why should we bother doing anything at all about the tiny problems of Social Security, when we can be enacting national health care to control rising medical costs!" (As much as a non-sequitor as that last phrase is.)

But it won't work in the end, because that 50% income tax increase coming at us will be clearly visible to everybody, left and right, in the 2020s, about 15 years from now. And the program cut-backs needed to get those tax hikes enacted will be plainly visible too -- Reich and the left won't be able to deny and call these problems "tiny" any more. Lucy-like, they may even have some 'splaining to do to the voters.

What if Congress doesn't increase taxes or cut retiree benefits by 2030, but just lets things roll along? S&P projects the credit rating of the US in that scenario in the chart below. That's by 2027 -- which is even before 2030. That's how "tiny" the non-"rising health care costs" of entitlements are!


(Well, at least we'll have the consolation of watching the French go off the cliff first if they don't wise up any more than we do.)

Hat tip to Andrew Biggs, former Deputy Commissioner for Policy of the Social Security Administration, for the chart above. He has a lot more to say about all this and the Trustees Reports. He has a few words of his own about Reich too. 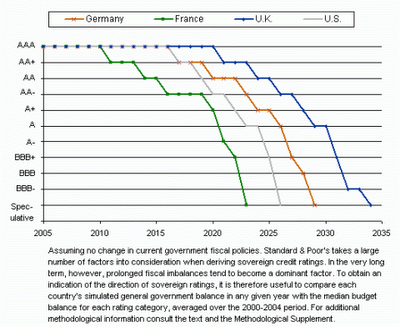 In The Long Run, We Are All Debt: Aging Societies And Sovereign Ratings