ACORN outed for idiocy. Candidate for a political Darwin Award?

By now you've heard all about the ACORN employees getting "stung" on video while giving helpful advice on how to illegally raise, hide and best use money in the prostitution business, to a purported "pimp and ho" in Washington, Baltimore and now New York. 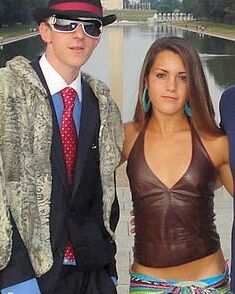 Result: The Senate has voted 83-7 to cut off ACORN's federal funding, making it ineligible for Housing and Urban Development funds -- effectively putting it out of business as a group allegedly dedicated to supporting affordable urban housing.

OK, if you are ACORN all that arguably is bad enough -- but even worse is how stupid you are. Here are the whitebread middle-class conservative activist couple who repeatedly successfully passed themselves off to you as inner-city "pimp and ho". How dim did you have to be?

Duo Who Turned This Trick 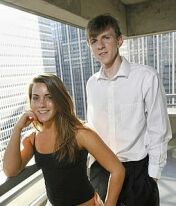 And James E. O'Keefe III, 25, a Fordham MBA student from New Jersey, isn't a pimp so much as a pro vocateur -- determined to expose what he sees as the hypocrisies and moral lapses of liberals by employing their own tactics against them.

The pair met last year on Facebook after O'Keefe posted his own gotcha videos, showing Planned Parenthood employees agreeing to his request to earmark his donations for the abor tions of African-American babies...

After six weeks of research, Giles said they scavenged together their costumes from friends, except for the pimp coat, which was on loan from O'Keefe's grandmother.

O'Keefe contends their tactics are "the future of activism and investigative reporting".

Congrats and kudos to O'Keefe and Giles, who did far more to expose ACORN using little more than grandma's coat than the mainstream media with all its resources managed to do in a decade.

Here's the story of their subtle infiltration of ACORN's Brooklyn office and the video they took. (And more ACORN video from Baltimore and Washington DC.)

As to ACORN: if Darwin Awards were given to political organizations, we'd have a winner here.