What would you do if your bank accidentally put $6 million in your checking account? Take that exotic Asian vacation you always thought about?

Couple Took the Millions and Ran

And tell your friends all about the good time you are having?

Aw, maybe you'd do better giving the money back to the bank, and just taking a bus to Atlantic City. To relax.

"This was only my second time playing craps, so this was very exciting for me to be a part of history."

-- Patricia DeMauro, after setting a world record by rolling the dice 154 times over four hours and 18 minutes before she "sevened out", at Atlantic City's Borgata Hotel and Casino.

DeMauro, a grandmother from Denville, had played craps only once a couple months earlier, shooting the dice about five times...

According to Michael Shackleford -- a statistician dubbed the Wizard of Odds and an adjunct professor at the University of Nevada, Las Vegas -- DeMauro had only one chance in about 3.5 billion to roll 154 times...

DeMauro refused to say how much she won, revealing only that she "walked away happy."

She did reveal her secret, however.

"When you relax about it, these things happen," she said... [NJ.com] 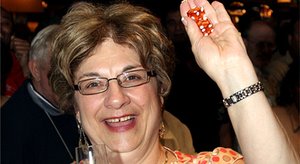