How much did Tammany Hall steal from New Yorkers, in today's money? 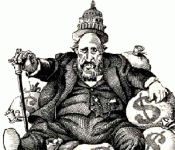 A history of the New York City subway system, 722 Miles, explains why, during the closing years of the 19th Century, all proposals to have the New York City government build and operate the city's planned new subway system were summarily rejected by the public and civic leadership, in favor of having private business do the job:

Most opposed municipal [management] as an open invitation to Tammany thievery. Two decades earlier the regime of William M. Tweed, the boss of the Tammany Hall Democratic organization, plundered more than $100 million from the city... In the 1890s the memories of the Tweed ring remained so strong that private, not municipal, ownership was widely regarded as the best safeguard of the public treasury.

That was because while Boss Tweed had long since moved on to make his final deal with his maker, Tammany still lived on.

The loss of that $100 million through theft and, even more so, Tammany's notorious "honest graft", traumatized the city for generations.

Yet today $100 million is barely even noticed amid the cost overruns in the bungled rebuilding of just two subway stations following the 9/11 attacks, at South Ferry and Fulton Street (the latter's cost now up to $1.4 billion, while three years behind schedule so far) -- as evidenced by the fact that virtually nobody in the city cares.

So $100 million must have been one heck of a lot more valuable to the people of the city then than it is today. How much more? What was the scale of Boss Tweed's accomplishment in our terms?

Well ... it's not so easy to say, exactly. To start with, we can use the Bureau of Labor Statistics inflation calculator that adjusts dollar values by the Consumer Price Index.

This only goes back to 1913, but as the dollar was on the gold standard then and in earlier years (back to just after the Civil War) there was no systematic inflation during that time (even a little deflation) ... so the 1913 value can be taken as a rough approximation for the price level in those earlier years. That gives $100 million in Boss Tweed's 1870 dollars as equal to about $2 billion today (maybe a little less allowing for the late 19th Century's mild deflation).

Now $2 billion is a nice haul for any pack of thieves, but hardly seems enough to traumatize a whole citizenry for generations. Bernie Madoff stole a good deal more and we're getting by.

But the CPI's usefulness as an accurate price measure diminishes over time, and over a spread of time as long as this it becomes functionally meaningless, due to several factors. In ascending order of importance...

[] Substitution. (The least important factor, so of course the one that consumed the most class time when I took my econ courses, probably because it is the one most readily handled with the type of math used in exam problems). Suppose that consumers are indifferent to consuming apples and oranges, and they both cost the same, so the CPI "basket of goods" contains equal amounts of both. Then say the price of oranges rises for some reason (perhaps there's a poor crop simultaneous with a surge in demand for industrial use). The "apples & oranges" component of the CPI will show a price rise (inflation!) but in fact consumers will just shift from buying oranges to buying apples and be just as happy, suffering no loss to inflation at all. The more time passes, the more substitution occurs.

[] Quality improvements. As goods at a given price become better quality they become cheaper per dollar paid for them. There are countless examples, from computer processing power increasing via Moore's law to milk becoming homogenized, fortified with vitamin D, and containing all the other enhanced benefits the derive from being produced by genetically enhanced super-cows.

The BLS tries to keep up with this when computing the CPI, but as the general rule is that in a competitive economy all products improve in quality, it's really impossible. William Nordhaus argues that omitting improvements in the quality and cost of lighting [.pdf] by itself has historically distorted the CPI.

[] New products. I'm old enough to remember when cell phones cost $1,000 plus $10 a call, and were as portable as a brick. By 2000 or so they'd dropped in price and improved in quality to the point were my wife sometimes couldn't find hers in her purse and would have me, standing beside her, call her from mine to help her find it and dig it out. During most of those years, as millions of users came to own cell phones, they didn't even exist in the computed CPI.

But before improvements in a good's price or quality can be reflected in the CPI, it must be treated as existing! Arguably, from 1983 to 1999 the CPI was significantly distorted just by the omission of cell phones from it. But countless new products are introduced in the market every year, the BLS can never account for all of them. As with cell phones, it can only identify and start accounting for the most important ones years after the fact.

[] Growth of the economy. For many purposes this is the most important factor. Imagine wanting to determine the cost of, say, the Manhattan Project in today's terms. Even if you had an accurate "inflation adjustment" to give its dollar-figure cost in today's dollars, this would understate its true cost greatly, because true cost can be determined only relative to income (or wealth). Today's economy is about six times larger than that of the 1940s, so true cost in the 1940s would be about six times larger than the "2009 dollars" number indicates, in terms of the portion of total national income needed to pay for it.

Lots of different income/wealth numbers grow with the economy. Deciding which is best to use when making an historical cost comparison depends on the type of cost one is looking at. For a "national" cost such that of Apollo moon landing, fighting World War II, or the Credit Mobilier scandal in building the transcontinental railroad, GDP might be best. For consumer expenditures, one might look at the average wage of the time.

So, for instance, the Manhattan project cost $2 billion (we are told by Wikipedia). By CPI this translates to about $25 billion in 2009 dollars -- but by share of GDP it equals $130 billion. Serious money.

But back to Boss Tweed ... just how successful were The Boss and his Tammany minions at using fraud and "legal graft" to extract resources from New York City?

In terms of adjusted consumer prices the EH.net calculator tells us $100 million in 1870 dollars equals $1.7 billion in 2009 dollars. But again, in terms of 2009 dollars everybody was much poorer then, and the entire United States economy was only a small fraction of its size today.

Since Tammany's takings were a cost extracted from the government, it seems fitting to look at them in terms of total national resources, as a percentage of GDP, the portion of total national production lost to their corruption. And the figure the EH.net calculator gives us for that is ... $184 billion.

That is, in terms of total national production, the Boss and his Gang took from New York City alone 40% more than the entire United States spent on the Manhattan Project during World War II.

Hey, we can see why the taxpaying members of the local Chamber of Commerce would remember that for a while!