The end of Encarta -- and of the mystique of Microsoft.

Another Microsoft product goes down.

Encarta was conceived pre-Web and had a long gestation. In 1985, Bill Gates envisioned a CD-ROM encyclopedia as a “high-price, high-demand” product with the potential of becoming as profitable to Microsoft as Word or Excel...

Early in the project’s history, a focus group of prospective customers was convened, and participants said they would happily pay $1,000 to $2,000 for a multimedia encyclopedia on CD-ROM ... [NY Times]


But even focus groups can't see the future. Encarta had a moderately successful run for a decade or so at a price falling from $99 to $29.95.

Microsoft hasn't had a real success with a new product for good long time now. It's stock has become a "me too" member of the stock market, performing modestly poorer than the S&P 500 over the last decade. 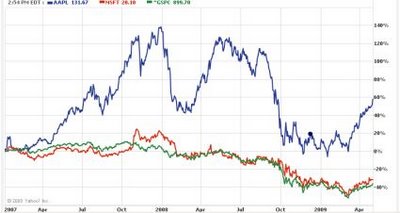