A German zoo has imported four female penguins from Sweden in an effort to tempt its gay penguins to go straight.

The four Swedish females were dispatched to the Bremerhaven Zoo in Bremen after it was found that three of the zoo's five penguin pairs were homosexual... 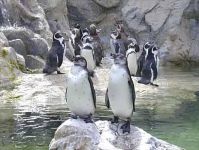 Director Heike Kueck said ... the birds had been mating for years and one couple even adopted a stone that they protected like an egg.... the penguins, which are native to South America, are an endangered species.

But introducing the Bremerhaven penguins to their new Swedish friends may not be as successful as hoped after earlier experiments revealed great difficulties in separating homosexual couples.

A plan by a German zoo to test the sexual appetites of a group of suspected homosexual penguins has sparked outrage among gay and lesbian groups, who fear zookeepers might force them to turn straight.

"All sorts of gay and lesbian associations have been e-mailing and calling in to protest," said a spokesman for the zoo in the northwestern city of Bremerhaven on Friday... when word got out about the plan, the phones started ringing.

"Nobody here is trying to break-up same sex pairs by force," the zoo's director Heike Kueck told public broadcaster NDR. "We don't know if the three male pairs are really gay or just got together because of a lack of females." [Reuters]


Now there's one for the philosophers: how to tell if a penguin is really gay?
link, posted at 1:23 AM